The Floating Desalination Production Vessel (FDPV) is conceived from the Floating Production Storage and Offloading (FPSO) concept and developed by Lansco Desalination technology experts. With a comprehensive desalination facility on board - i.e. intake, pretreatment, including treated water storage tanks, the FDPV is able to supply fresh, clean water at any location immediately.

Spearheaded by Lansco’s engineering excellence and membrane-based water treatment expertise, the FDPV is an excellent support facility for maritime industries and remote communities. Mobile and highly ﬂexible, the FDPV can be used during a crisis, an emergency or as an alternative to land-based desalination plants. An affordable and easy on-site supply of high-quality water can now be achieved out at sea.

Not only Vital to sustaining life, but water is also essential to the functioning of our modern society, Over the years. rapid climate change and the increase in occurrences of natural disasters globally have posed challenges for humanitarian organizations to provide a secure and clean supply of water to victims quickly.

Desalination is the answer to the world's thirst and land-based desalination is experiencing a rapid growth 57% in installed capacity over the past 5 years (IDA & GWI figures). Despite this rapid growth, the demand of clean water far exceeds the supply.

This is mainly attributed to the lead time required to complete a desalination plant as construction requires a minimum of 30 months.

With the new FDPV, the lead time needed to complete a desalination production facility will be greatly reduced making it highly favorable for humanitarian organizations or communities which require a clean supply of water urgently.

Why A Floating Desalination production Platform 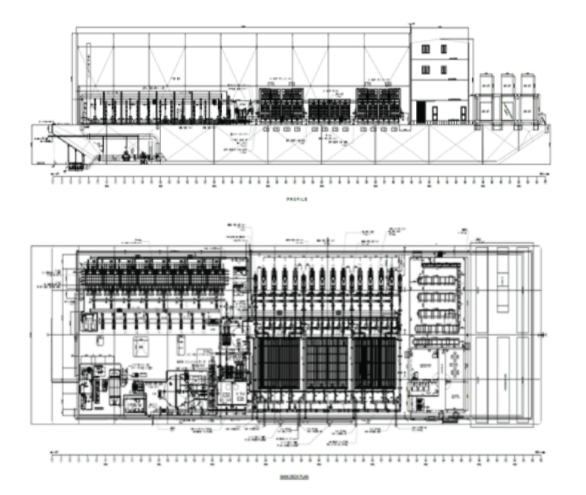 Seawater is drawn via pipes connected to the sea. The seawater passes through filter screens of 20 mm and 2 mm before being pumped to an array Of auto-strainers of 100m and onwards to the UF pre-treatment system.

Lansco’s Kristal® UF membranes are used in the pretreatment system. Kristal® UF membranes have been tested to effectively remove microorganisms and bacteria which can foul the downstream RO system. The result is a permeate of consistently high quality that will boost the performance and lifespan of the RO membranes.

After the RO. the RO and the backwash reject stream is discharged back into the sea.

The water is then stored in the product water tank before use, alternatively it can be stored in pillow bladders & collapsible flexi tanks for emergencies.

The water after the two-pass RO treatment is very pure and is re-mineralized by dosing with lime and carbon dioxide to adjust the pH level. Chlorine. fluoride and ammonium sulfate are added to fluoridation and
chlorination.

The details of the barges are shown in the following table.

In order to advise a rapidly deployable that can cover an urgent severe demand of water shortages at the holy mosque in Makkah Al-Mukarmah during Hajj season 2008, a self-contained solution for water desalination mounted on two independent barges was commissioned and ﬁtted in 9 months.

Both barges were initially anchored adjacent to the Shuaibah plant (Near Makkah) to augment its desalinated water output for hajj season and thereafter relocated to Jizan Area for 18 months to alleviate water shortages in the southern region.

In June 2010, the barges moved to their current location at Yanbu with a continuous supply of potable water to the holy mosque & pilgrims in Al-Madinah Al-Munawarah.

As BOWAREGE is considered a strategic solution for water security. So, the journey of BOWAREGE was as follow:

With a massive production of over than 120 million cubic meters of potable water since 2008 and till date.